There are really only two wildlife removal methods to have an opossum removed from your property. Live catch or traps. Opossums are one of the easiest animals to trap, almost any food will work.

Live catch is simply being able to be close enough to grab the animal either by your hand (if young enough) or with a catch pole. 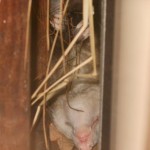 Opossum Hiding in a Garage Wall

Only a trained professional wildlife control handler should attempt hand removals. The dangers of handling opossums are easy, TEETH. 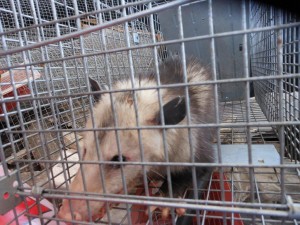 trained in taking a MAD opossum down an attic stair step. Homeowners beware, traps malfunction and opossums will attack you. Leave it to the professionals.

Opossums mostly carry fleas and ticks. Rabies is not often found in opossums because their body weight is too low for the virus to survive.

Opossum (Didelphis Virginiana) is the only marsupial in North America commonly referred to as the possum. Easily recognized by its naked tail the opossum is a nocturnal creature and weighs about 10-13 pounds. Thriving in rural and suburban areas, most people do not realize that opossums live amongst us.

Opossums only live around two years. They have the most teeth, 50, more than any other mammal in North America. Opossums eat almost anything. Opossums have become fond of human trash. Naturally they eat carrion, road kill, snakes, frogs, and insects.

Opossums have a gestational period of only 12-13 days. They will give live birth up to 14 young at a time. The young will climb into the pouch and continue to grow for 10 weeks. When too large for the pouch they will hold on to the back of the mother and ride her round.

Opossums, when threatened, will roll upside down and play dead, sometimes with their eyes open.

Opossuums are excellent climbers. They have opposable thumbs on their hind feet. Hind feet like thats make it easy to grip tree branches to climb. 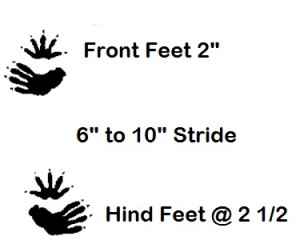 Wildlife removal of an opossum should only be preformed by a trained professional wildlife removal control officer or handler. Even though opossums are not the smartest animal, they are one of the most common service calls in the nuisance wildlife indusrty.